The Landau-Lifshitz model for ferromagnetic samples \(\Omega\) states that the magnetization \(m\), a vector field of unit length on \(\Omega\), is determined through the competition of four different mechanisms:

The configurations that are observed in experiments are conjectured to be (local) minimizers of the associated Landau-Lifshitz energy \(E(m)\). We refer to [1] for details on this energy functional.

Through the four competing effects and the non-convex unit-length constraint, minimizers of \(E\) exhibit a large variety of interesting patterns, e.g. 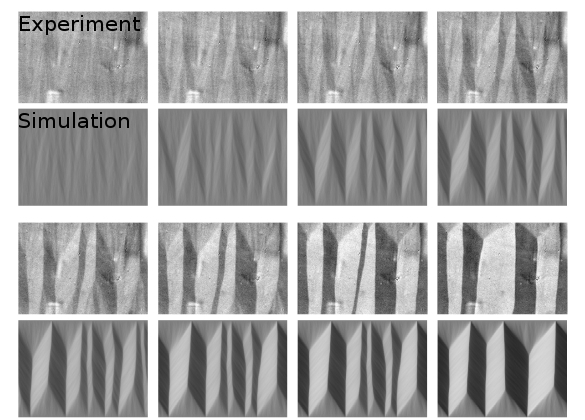 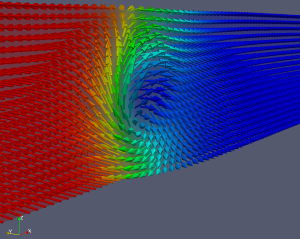 When material parameters and involved length scales are extremal, one can often use (rigorous) asymptotic analysis to derive from the few basic effects mentioned above a reduced model that - in this particular regime of parameters - still captures the important features of the full Landau-Lifshitz model. Such a simplified model then will at best already explain the physical observations, or at least reduce the complexity of their numerical simulation.

Below, we give four examples that demonstrate the use of theoretical analysis, numerical simulation and experiments in order to explain certain physical phenomena:

Ferromagnetic materials can be divided into two classes with distinct features, depending on the strength of their anisotropic behavior. In our analysis, we usually assume that there is only one easy axis that is given by a unit-length vector \(e\), that is, the material is uniaxial.

In "hard" materials, where the contribution from the anisotropy dominates the Landau-Lifshitz energy \(E\), the magnetization essentially favors only two states: Parallel or anti-parallel alignment with the easy axis \(e\). Assuming a bulk sample that is not affected by an external magnetic field, the lower-order contributions from stray-field and exchange energy determine the actual pattern. While a constant magnetization  \(m=e\)  or  \(m=-e\)  avoids the exchange energy, the resulting stray-field is rather large, due to the non-vanishing normal component of \(m\) on a part a the sample surface. On the other hand, the stray-field energy, which can be expressed as \(H^{-1}\)-norm of \(\text{div}(m)\), favors magnetizations quickly oscillating between the two states \(+e\) and \(-e\). This, however, induces a large exchange energy.

We rigorously investigated this "domain branching" in a work with Viehmann [2], where the asympotically exact scaling of the minimal energy was derived, improving on previous work with Choksi and Kohn. 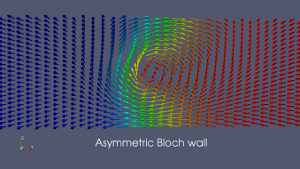 However, one should note that the exchange energy in fact prevents a jumping magnetization, as was assumed in the previous heuristic reasoning. Indeed, it will rotate smoothly between two domains of almost constant magnetization, but on a very small length scale, compared to the size of the domains. 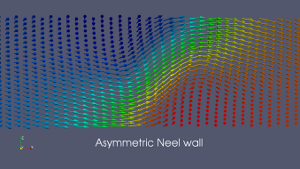 The type of those transition layers - usually called domain walls - is particularly interesting in the class of soft materials with almost negligible anisotropy, when additionally the sample is a thin ferromagnetic film: If the film is very thin, the exchange energy prevents variation of \(m\) in the thickness direction, while the stray-field energy prevents an out-of-film-plane component of \(m\) on the film surface, and hence also in the interior of the film. 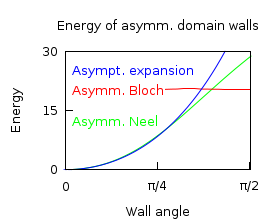 In thicker films, variation in the thickness direction is not as strongly penalized, such that two different divergence-free transition layers - the so-called asymmetric Néel and Bloch wall - can emerge. Those asymmetric walls are of small wall width and completely avoid the stray-field.

In the interesting regime of moderate film thickness, where symmetric and asymmetric domain walls are of comparable energy, the optimal transition layer is expected to exhibit both features: Logarithmically decaying tails are attached to asymmetric, divergence-free wall cores. With Ignat in [3], we derived a reduced model that captures the splitting of the wall energy into the energy of an asymmetric wall and the well-understood energy of the logarithmic tails. By exploiting the scale separation in narrow core and long tails, the reduced model is capable of determining the experimentally hardly accessible relative amount of rotation in the asymmetric wall core via numerical simulation of much lower complexity, compared to the full Landau-Lifshitz model. 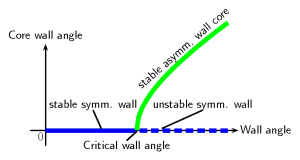 By rigorously deriving a Taylor expansion of the mathematically challenging exchange (better known as Dirichlet) energy of divergence-free unit-length vector fields for small rotations in [4], we were able to give evidence of a supercritical bifurcation of an asymmetric wall core from the purely symmetric Néel wall structure, as film thickness and amount of rotation in the transition layer increase.

The cost of transition layers between domains of constant magnetization in terms of their energy per interfacial area strongly affects the observed domain patterns. An interesting configuration in very thin films, where the symmetric Néel wall is the favoured transition layer, is the so-called concertina pattern.

In a series of articles [5,6,7,8] and in collaboration with a group of experimental physicists of the IfW in Dresden, we investigated the formation and hysteresis of the concertina pattern. 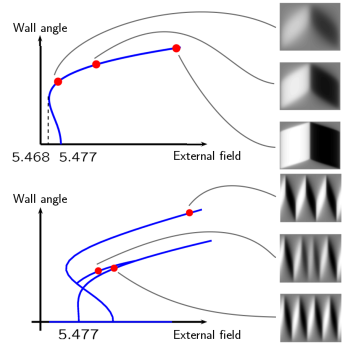 This almost periodic magnetization pattern is frequently observed during the switching process of the magnetization in elongated thin ferromagnetic samples. The configurations observed during the switching, which is initiated by the slow reversal of an applied magnetic field, are meta-stable. This means that they are not ground-states but that they are local minima of the micromagnetic energy - as is typical for hysteretic processes. 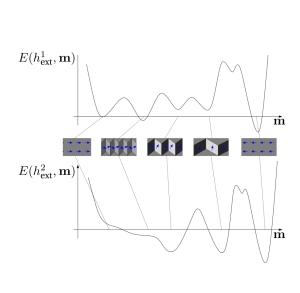 In the experiments, one observes that during its lifetime and before its decay the concertina pattern coarsens several times, successively increasing the period. Figure 2 schematically depicts the energy landscape for two different values of the external field. As the external field increases and passes the critical field, the energy landscape is deformed. Local minima are destroyed and the concertina pattern successively coarsens towards a pattern of large period.

The first step towards understanding this behavior was a linear stability analysis of the uniform magnetization by which we identified the relevant thin-film parameter regime. It turned out that at some critical value of the reversed applied field, the uniform magnetization becomes unstable under an oscillatory perturbation. The experimentally observed period of the oscillation is in relatively good agreement with the period of the unstable mode but always slightly larger. The basis for the identification of the relevant physical mechanisms behind this deviation and the coarsening of the pattern is a reduced model that we rigorously derived in [7]: Asymptotic analysis and numerical simulations revealed that both effects are related to a modulation instability which in turn is closely related to the so-called Eckhaus-instability - an instability that is known from the analysis of convective systems. 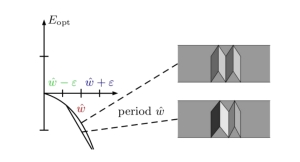 The mechanism of this instability can be understood on the level of domain theory which shows that the minimal energy per period is a concave function of the period. Hence, as depicted in Figure 3, it is energetically favorable to perturb a configuration consisting of two folds of equal width by slightly decreasing and slightly increasing, respectively, the width of the folds. This finally leads to the coarsening, see Figure 1.

We also investigated the effect of material disorder, more precisely polycrystalline anisotropy: Figure 4 shows a comparison between the experimentally observed concertina and our simulations for different values of the external field. 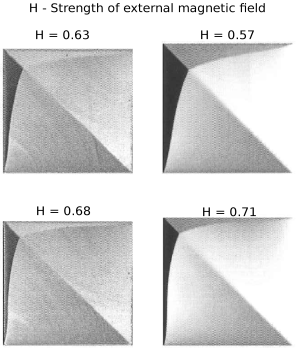 In [9] a reduced model for the simulation of soft ferromagnetic samples under an external field is proposed. It is rigorously derived in [10] as \(\Gamma\)-limit of the full variational model for sufficiently large and thin samples within a certain parameter regime. Numerical simulations based on this model consist of a two step algorithm: First, the so-called effective magnetization \(m\) is computed under the relaxed constraint \(\vert m \vert \leq 1\). This represents the average magnetic charges due to external field and stray-field energies. Second, a stray-field free corrector that heuristically minimizes interface energy, i.e., wall energy, is added to obtain a physically relevant unit-length magnetization. This allows the reconstruction of certain mesoscopic patterns from the effective magnetization, i.e. explain the formation of the Landau ground states and corresponding distorted states that form under an adiabatically increased external field. One open question that is treated in the group is the rigorous analysis of the regularity of the effective magnetization.

In [11] we modified the model from [9] to allow for further applications. We replace the heuristic interface minimization in the second step of the algorithm by a more sophisticated selection criterion: As described in the Section on Wall configurations, an asymptotically correct energy density \(e(\alpha)\) of a wall (in dependence of the angle \(\alpha\)) is accessible. We thus first compute the energy density that corresponds to the desired parameter setting. Then, we solve a diffuse interface model (with numerical parameter \(\epsilon \ll 1\)) that asymptotically ensures: 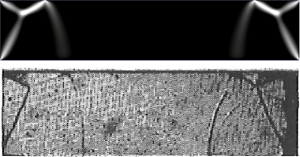 This approach is more flexible than the original selection criterion for the corrector function. It allows us to prescribe additional boundary data and thus effectively extend the range of applications. In [12] the authors describe the formation of a concertina pattern in rectangular films of moderate aspect ratio based on their experimental data. Apparently, hysteresis occurs due to the pinning of so-called wall-clusters at the boundary. This pinning can be explicitly included into our extended model; first numerical simulations show good qualitative agreement with experimental data. The extension of the model and the algorithms to capture the creation process of the whole concertina pattern is - among others - subject of ongoing research.

The simulation of the model from [9,11] requires sophisticated numerical schemes. In the dissertation [13], a barrier method is employed to compute the effective magnetization. In [14] a convergent penalty method is proposed and analyzed. The original selection criterion for the corrector requires to compute the viscosity solution to a modified Eikonal equation. This can be done by well-known level-set methods. The new selection criterion requires to solve a non-linear 4th order equation with very small parameter \(\epsilon\) weighting the leading order term. The development of suitable stable and reliable (adaptive) numerical schemes is a field of active research.