A model of thermal convection 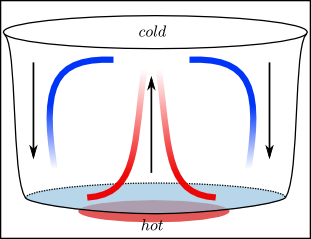 Figure 1: Box filled with water. The bottom plate is heated, the top is cooled.


Rayleigh-Bénard convection (RBC) is the buoyancy-driven ﬂow of a ﬂuid heated from below and cooled from above. This model of thermal convection is a paradigm for nonlinear and chaotic dynamics, pattern formation and fully developed turbulence (Kadanoﬀ 2001 [1]). RBC plays an important role in a large range of phenomena in geophysics, astrophysics, meteorology, oceanography and engineering. The problem under investigation is:
Given an incompressible ﬂuid enclosed in a container heated from below and cooled from above, what are the ﬂow dynamics? In particular, what is the heat transfer from the bottom to the top?

The mechanisms that determine the dynamics are:

The interplay of these three mechanisms produces interesting dynamics inside the box. 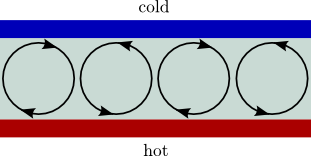 In the numerical simulation below, the ﬂuid is at rest in the bulk until convection rolls appear which in turn are destabilzed by ﬁnger-like structures that detach from the boundary layers, called plumes. Eventually these formations trigger the breakdown of the convection rolls and the motion becomes chaotic/turbulent.

In the Oberbeck (1879) -Boussinesq (1903) approximation, where the density \(\rho\) is assumed to depend linearly on the temperature \(T\) , the dimensionless equations of motion are : 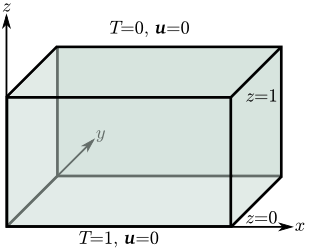 Figure 3: The geometry of the setup and boundary conditions. Periodic sidewall conditions are imposed. 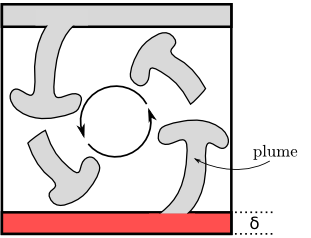 
In the applications, it is of interest to measure the effectiveness of the motion. The most natural and accepted measure that quantifies the enhancement of vertical heat flux due to convection is the Nusselt number, \(Nu\).
Integrating in \(z\in (0,1)\) the long-time and horizontal-space averaged heat flux \(uT-\nabla T\) in the vertical direction, we obtain the mathematical definition of the Nusselt number

Since the convective fluid flow increases vertical heat transport beyond the purely conductive flux, our challange is to determine the relationship

from the equations of motion.
In 1954 W.V.R Malkus [2] predicted the scaling law

has been postulated (Kraichnan (1962) [3] and Spiegel (1971) [4]) as an asymptotic regime in which the heat transfer and the strength of turbulence become independent of the kinematic viscosity and the thermal diffusivity.

In many situations in nature, when the fluid is very viscous (e.g, Earth's mantel and engine oils), the Prandtl number is very big. This motivates the interest in studying the limiting case when the inertia of the fluid can be neglected:

In this case of infinite-Prandtl-number fluids the scaling

is believed to be valid in the asymptotically high-Rayleigh number regime (Grossmann & Lohse 2000 [5]).

The derivation of physically relevant upper bounds has a long history, that goes back to the sixties (Howard (1963) [6] and Busse (1969) [7]). Several decades after, the introduction of the background field method (Doering & Constantin [11]) has produced significant results. This method consists of decomposing the temperature field into a background profile and a perturbation term,

By the background field method (BFM) the problem of finding upper bounds for \(Nu\) is reduced to the problem of constructing a background profile \(\tau\) that satisfies a marginal stability constraint. Then the Dirichlet integral of a marginally stable background temperature profile produces an upper bound for the Nusselt number.
Here, the possibility to construct a "good" stable background profile is possible thanks to the instantaneous linear slaving of the velocity to the temperature field.
Within the BFM (via marginal stability) many important results have been obtained.
The first rigorous upper bound, optimal up to logarithmic correction, was proved by P. Constantin and C. Doering in [8]:

Their proof relies on an \(L^{\infty}\) maximal regularity argument for the Stokes equation together with bounds on the average Laplacian squared of the temperature.
The construction of a non-monotone background profile with a "log-layer" in the bulk is the central idea in Doering, Otto & Westdickenberg [9] to derive

By refinement of the argument in [9], F. Otto and C. Seis in [10] improved the last bound obtaining

can be bounded from below by \(\big(\text{ln}^\frac{1}{15}\left(Ra\right)\big) Ra^\frac{1}{3}\). In particular this implies that \(\widetilde{Nu} \sim \big(\text{ln}^\frac{1}{15}\left(Ra\right)\big) Ra^\frac{1}{3} \) and no better bound can be produced by the background field method.
Nevertheless, the combination of the background stability with other methods can be implemented to produce better bounds.
Indeed by the additional use of \(L^{\infty}\) maximal regularity for Stokes equation, F. Otto and C. Seis [10] obtained the upper bound

which is, up to now, the best known.

As opposed to the case \(Pr=\infty\), here a major difficulty comes from the fact that the velocity and the temperature field are not instantaneously slaved to each other. Our current interest is in deriving rigorous upper bounds for \(Nu\) that reproduce both physical scalings \(Nu\sim Ra^{\frac{1}{3}}\) and \(Nu\sim Ra^{\frac{1}{2}}\) in some parameter regimes, up to logarithms.
In 1996 C. Doering and P. Constantin [11] applied the background field method to the problem, finding

for no-slip (or stress-free) boundary conditions.
Up to now, the best rigorous upper bound for large but finite Prandtl number is proved by X. Wang in 2006 [12]. With a perturbation argument on the Stokes equation the author proves

where \(c_0\) depends only on the aspect ratio of the domain.
Combining (logarithmically failing) maximal regularity estimates in \(L^{\infty}\) and \(L^1\) for the nonstationary Stokes equation with force terms given by the bouyancy term and the nonlinear term respectively, A. Choffrut, C.Nobili and F.Otto proved [in preparation] that

The result on one hand improves the bound in [12] and on the other hand captures a regime where the inertial effects are so strong that the convection unlinearity is not negligible. In particular, the notion of solution for the Navier-Stokes equation is that of Leray.
14.11.2019, 12:30