Bernd Sturmfels joined the board of directors of our Max Planck Institute in spring 2017. The renowned professor of mathematics, computer science and statistics moved from the University of California in Berkeley, USA to Leipzig, where he has built up the “Nonlinear Algebra” working group.

Bernd Sturmfels received doctoral degrees in 1987 from the University of Washington and the Technical University Darmstadt, and an honorary doctorate in 2015 from the Goethe University Frankfurt. After postdoctoral years in Minneapolis and Linz, he taught at Cornell University, before joining UC Berkeley in 1995, where he is Professor of Mathematics, Statistics and Computer Science. Since 2017 he is a director at the Max-Planck Institute for Mathematics in the Sciences, Leipzig. In 2018 he became Honorary Professor at Technical University Berlin and University of Leipzig. His awards include a David and Lucile Packard Fellowship, a Clay Senior Scholarship, a Humboldt Senior Research Prize, the SIAM von Neumann Lecturership, the Sarlo Distinguished Mentoring Award, and the George David Birkhoff Prize in Applied Mathematics. He is a fellow of the AMS and SIAM, and a member of the Berlin-Brandenburg Academy of Sciences. Sturmfels mentored 50 doctoral students and numerous postdocs, and he authored eleven books and 290 research articles in combinatorics, commutative algebra, algebraic geometry, and their applications to fields like statistics, optimization, and computational biology.

Learn more about Bernd Sturmfels and his love of mathematics in this video. Many thanks to his student Yulia Alexandr, who conducted this interview on the occasion of the ICM International Congress of Mathematics 2022. It is a great honor for Bernd Sturmfels to be invited as a guest speaker to this renowned congress. 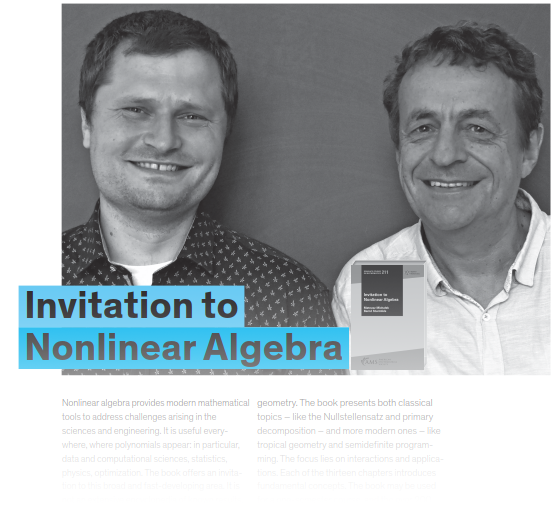 In their latest book project, Bernd Sturmfels and Mateusz Michałek offer a friendly invitation to the world of polynomials and their possible applications across sciences.