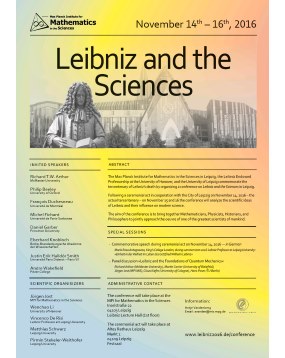 Conference: Leibniz and the Sciences

Max Planck Institute for Mathematics in the Sciences in Leipzig, the

Leibniz Endowed Professorship at the University of Hanover, and the

University of Leipzig commemorate the tercentenary of Leibniz's death by organizing a conference on "Leibniz and the Sciences" in Leipzig.

Following a ceremonial act in cooperation with the City of Leipzig on November 14, 2016 - the actual tercentenary - on November 15 and 16 the conference will analyze the scientific ideas of Leibniz and their influence on modern science.

The aim of the conference is to bring together Mathematicians, Physicists, Historians, and Philosophers to jointly approach the oeuvre of one of the greatest scientists of mankind.