The magnetization in ferromagnetic samples can exhibit a wealth of complex patterns. The development of an effective theory that can account for these patterns is one of the great achievements in theoretical physics, starting with the influential works by Landau and Lifshitz [6]. It turned out to be a reliable tool for the theoretical description of magnetization processes on the micron scale and therefore highly valuable in applications, e.g., the development of novel storage and sensing technologies such as magnetoresistive random-access memory (MRAM).

Micromagnetics is a remarkably powerful theory, but can be formulated in a relatively simple way. Within the Landau-Lifshitz model of micromagnetics, the magnetization (more precisely the saturation magnetization) is described by a unit-length vector field on the ferromagnetic body. In contrast to purely quantum mechanical theories it therefore does not account for individual magnetic spins. Nevertheless, it integrates quantum mechanical effects in a classical field description of the magnetization through the so-called exchange interaction, which penalizes variations of the magnetization on length scales of the order of the exchange length, which is a material parameter.

Observed magnetization patterns are minimizers of the micromagnetic energy. Due to the non-convex unit-length constraint on the saturation magnetization and the non-locality that enters through the energy of the stray field generated by the magnetization, micromagnetics is an analytically challenging and numerically demanding model. This explains why it is important to understand scaling limits that are suitable to describe the relevant contributions in certain asymptotic regimes.

For more details on the micromagnetic model, we refer the interested reader to the overview or article [1].

Universality of the magnetization ripple

The magnetisation ripple is a microstructure formed by the magnetization in thin ferromagnetic films, with its characteristic texture orthogonal to the average magnetization direction. It is triggered by the random orientation of the grains in a poly-crystalline material, which through the crystalline anisotropy effectively acts like a random field of white noise character on the scales relevant for the description of the ripple. From a physics point of view, the important feature of the ripple is its universal character, that is, the microstructure does not depend on the precise composition and geometry of the grains. 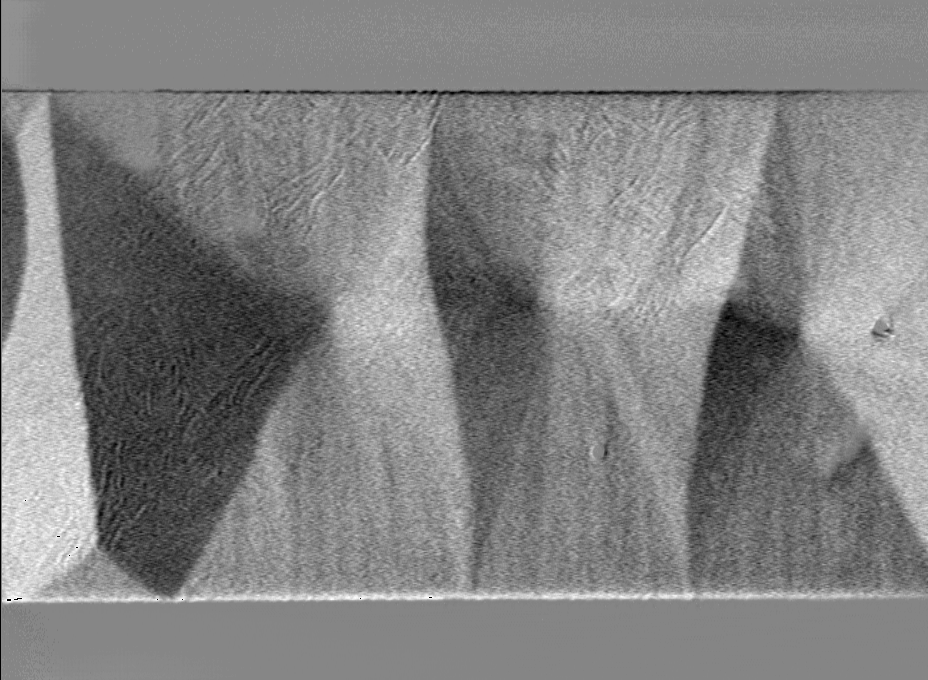 Figure 1: A permalloy thin-film exhibiting a cross-tie wall pattern and the magnetization ripple (the periodic parallel magnetization lines best seen in the lower parts of the cross-tie pattern) [7].

The term 'universality' is linked to a phenomenon where various random systems exhibit the same behaviour on large scales. The simplest example of universality is Donsker's invariance principle, a central limit theorem, which recovers Brownian motion as the limit in law of a suitably rescaled random walk (built from i.i.d. random variables of expectation 0 and variance 1).

The main goal of our work [5] is to show the universality of the magnetisation ripple. Following [4], we describe the ripple as minimizer of a reduced energy functional for the transversal component of the magnetization vector, composed by the sum of three contributions: the exchange energy, the stray field energy, and a noise term that acts like a random transversal field of white-noise character.

At this point, it is worth mentioning that to study the universality of the ripple, it is more natural to work on the level of the energy functional rather than the Euler-Lagrange equation, of which the minimizers are weak solutions. The reason is twofold: On the one hand, we cannot expect uniqueness of minimizers due to the non-convexity of the energy functional. On the other hand, the Euler-Lagrange equation is more amenable to a perturbative approach as developed in [4], allowing only a small-data analysis; however, we want to get rid of the smallness assumption. On a technical level, we use De Giorgi's \(\Gamma\)-convergence to endow the space of functionals with a topology which implies convergence of sequences of minimizers.

One of the main challenges in showing the universality of the ripple arises from the roughness of white noise. This is a common problem in the theory of singular Stochastic Partial Differential Equations (SPDEs), which has become a very active field in recent years. The word singular relates to the fact that the driving noise of these equations is so irregular that their nonlinear terms (which usually involve products of the solution and its derivatives) are not classically defined. We refer the reader to [3] for a more detailed exposition of the theory of singular SPDEs.

In the case of the ripple, the irregularity of the noise has two important consequences:
1. The energy functional is almost surely unbounded from below. Therefore, the energy functional is in need of a renormalization.
2. In a more detailed analysis of the renormalized energy functional (and in analogy with rough-path theory), in order to define certain products of functionals of the noise, one needs to extend the distribution of white noise in a way similar to the lift of a Brownian motion to its first iterated integral, see for example [2, Chapter 3].

A central tool in our probabilistic analysis is the spectral gap assumption on the class of probability measures for which our universality statement holds, that is, the measures satisfy an "infinite dimensional" Poincaré (also called spectral gap) inequality, which provides a good substitute for Gaussian calculus.